Sunrise over the VLT 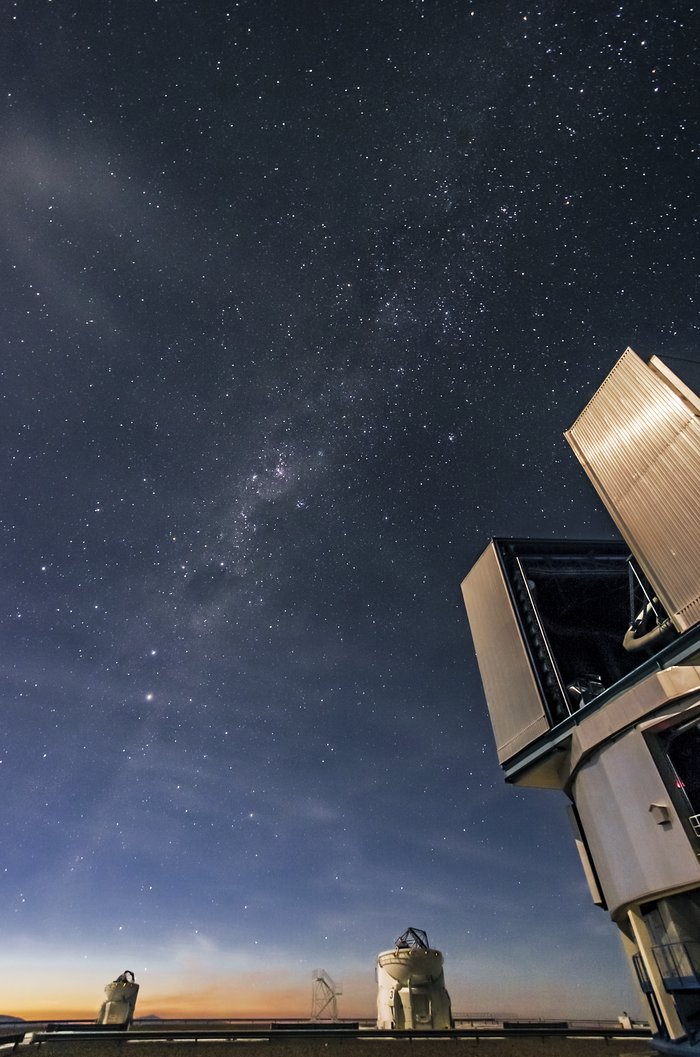 This image shows the beginning of sunrise over the Very Large Telescope (VLT) at ESO's Paranal Observatory in Chile. In this photo, one of the VLT's Unit Telescopes is visible to the bottom right, illuminated by moonlight. Further in the distance there are two Auxiliary Telescopes pointing upwards.

The VLT is formed of four 8.2-metre Unit Telescopes (UTs), and four movable 1.8-metre Auxiliary Telescopes (ATs). The telescopes can work together to form a giant interferometer: the Very Large Telescope Interferometer (VLTI). The light collected by each of these telescopes is combined by the VLTI using a complex system of mirrors in underground tunnels, allowing astronomers to see details up to 16 times finer than with the individual UTs alone.

The image was taken by Nicolas Blind, an astronomer who visited Paranal Observatory for a few days in December 2012. Blind may only have been at the observatory for a short period, but he had a truly memorable visit. "The absolute silence in this place is so peaceful and relaxing," he recalls. "You can only hear the sound of wind, or maybe a bat lost in this desolated area. The pure sky of Paranal reminds me each time how little we are, and reconnects me with the reason why I have chosen astronomy."

Paranal Observatory experiences an incredible 330 clear nights per year. In fact, thanks to the technology, staff, and clear conditions, the VLT is the most productive individual ground-based facility in the world.

Nicolas Blind submitted this photograph to the Your ESO Pictures Flickr group. The Flickr group is regularly reviewed and the best photos are selected to be featured in our popular Picture of the Week series, or in our gallery.

Lähetä meille kommentteja!
Subscribe to receive news from ESO in your language
Accelerated by CDN77
Myyntiehdot