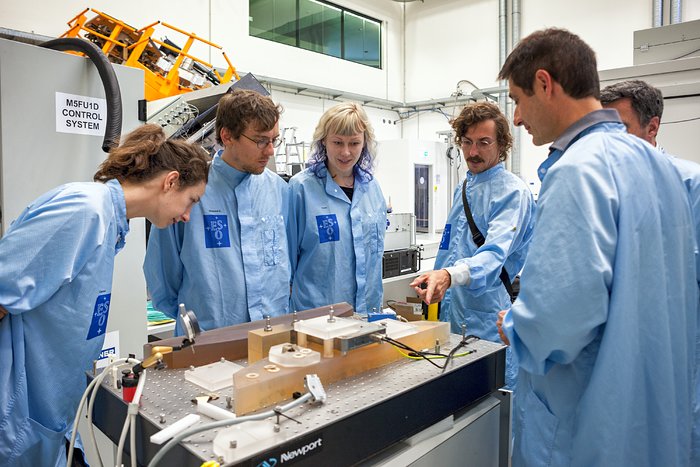 Quadrature, the winners of the 2015 art&science@ESO Residency Award paid a visit to ESO headquarters in Garching on the 4 July 2016. A group of artists now based in Berlin, the team consists of Jan Bernstein, Sebastian Neitsch and Juliane Götz. Together they describe themselves as “an atelier for arts, robotics and light”.

The award is the result of the ongoing cooperation between ESO and Ars Electronica. Quadrature were selected from a highly competitive pool of 322 entrants from 55 countries who responded to the 2015 Open Call. For their prize, they will take up a residency at one of ESO’s observatories in Chile, followed by a month at the Ars Electronica Futurelab in Linz, Austria where they will develop and create new work inspired by the visit to ESO.

Quadrature had these poetic words to say about the telescopes in operation at the ESO sites in Chile: "Awake at night, regenerating during the day, the huge white telescopes are constantly trying to eliminate the last bit of distracting earthly influences. As superior technical beings, they perform an endless dance of calibration and observation. There is no cause for alarm... but there probably will be."

The last (somewhat ominous) sentence is a playful reference to an automated voice message that is repeated in one of the ESO telescope control rooms every 5-10 minutes, signalling everything is fine with the telescope itself, with a touch of cynicism looking to the future.

Sebastian Neitsch gave a very simple explanation for the group's fascination with the cosmos in a blog interview with Ars Electronica: “We grew up with stories and images of our universe, both real-life accounts and utopian ones. Rockets, time travel, space stations, life on Mars, aliens … Scientists aren’t the only ones for whom the cosmos and space exploration provide a virtually inexhaustible source of inspiration.”

To read about the Quadrature visit to the ESO sites in more depth, visit the beautiful blog-post by Ars Electronica, written and filled with photos to commemorate their journey.