Carving a route to Armazones 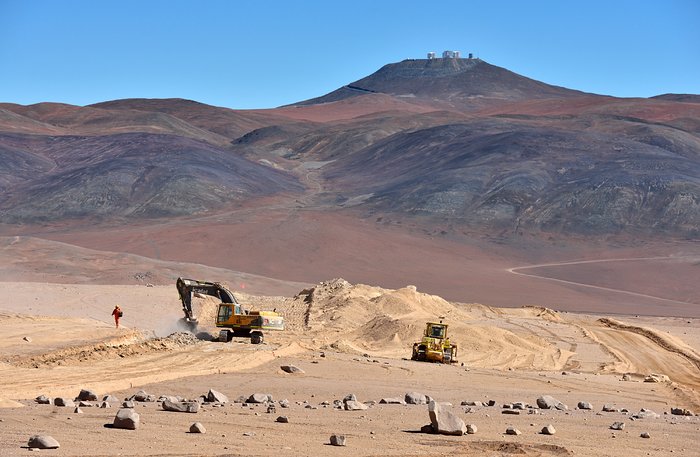 At present ESO hosts three observatories in the Atacama Desert region of Chile: La Silla, Paranal and Chajnantor. Visible in the background of this image is Paranal, ESO’s flagship facility and home of the Very Large Telescope (VLT) array.

In coming years, this trio will be joined by a fourth observatory: Cerro Armazones, future site of the European Extremely Large Telescope (E-ELT). With its 39-metre-diameter mirror, the E-ELT will be the world’s biggest eye on the sky when construction is completed around 2024.

Cerro Armazones is currently only linked to Paranal by a dirt track — but, as shown in this image, construction is underway. The Chilean company ICAFAL Ingeniería y Construcción S.A. (ICAFAL) began construction in March (ann14019), and is due to take around 16 months to complete a new 7-metre-wide asphalt road. As well as carving a new road through the Chilean landscape, ICAFAL will level off the top of Cerro Armazones to create a usable platform for the E-ELT.