An international team of astronomers have used ground-based telescopes, including the European Southern Observatory’s Very Large Telescope (ESO’s VLT), to track Neptune’s atmospheric temperatures over a 17-year period. They found a surprising drop in Neptune’s global temperatures followed by a dramatic warming at its south pole.

“This change was unexpected,” says Michael Roman, a postdoctoral research associate at the University of Leicester, UK, and lead author of the study published today in The Planetary Science Journal. “Since we have been observing Neptune during its early southern summer, we expected temperatures to be slowly growing warmer, not colder.”

Like Earth, Neptune experiences seasons as it orbits the Sun. However, a Neptune season lasts around 40 years, with one Neptune year lasting 165 Earth years. It has been summertime in Neptune’s southern hemisphere since 2005, and the astronomers were eager to see how temperatures were changing following the southern summer solstice.

Astronomers looked at nearly 100 thermal-infrared images of Neptune, captured over a 17-year period, to piece together overall trends in the planet’s temperature in greater detail than ever before.

These data showed that, despite the onset of southern summer, most of the planet had gradually cooled over the last two decades. The globally averaged temperature of Neptune dropped by 8 °C between 2003 and 2018.

The astronomers were then surprised to discover a dramatic warming of Neptune’s south pole during the last two years of their observations, when temperatures rapidly rose 11 °C between 2018 and 2020. Although Neptune’s warm polar vortex has been known for many years, such rapid polar warming has never been previously observed on the planet.

“Our data cover less than half of a Neptune season, so no one was expecting to see large and rapid changes,” says co-author Glenn Orton, senior research scientist at Caltech’s Jet Propulsion Laboratory (JPL) in the US.

The astronomers measured Neptune’s temperature using thermal cameras that work by measuring the infrared light emitted from astronomical objects. For their analysis the team combined all existing images of Neptune gathered over the last two decades by ground-based telescopes. They investigated infrared light emitted from a layer of Neptune’s atmosphere called the stratosphere. This allowed the team to build up a picture of Neptune’s temperature and its variations during part of its southern summer.

Because Neptune is roughly 4.5 billion kilometres away and is very cold, the planet’s average temperature reaching around –220°C, measuring its temperature from Earth is no easy task. “This type of study is only possible with sensitive infrared images from large telescopes like the VLT that can observe Neptune clearly, and these have only been available for the past 20 years or so,” says co-author Leigh Fletcher, a professor at the University of Leicester.

Around one third of all the images taken came from the VLT Imager and Spectrometer for mid-InfraRed (VISIR) instrument on ESO’s VLT in Chile’s Atacama Desert. Because of the telescope’s mirror size and altitude, it has a very high resolution and data quality, offering the clearest images of Neptune. The team also used data from NASA’s Spitzer Space Telescope and images taken with the Gemini South telescope in Chile, as well as with the Subaru Telescope, the Keck Telescope, and the Gemini North telescope, all in Hawai‘i.

Because Neptune’s temperature variations were so unexpected, the astronomers do not know yet what could have caused them. They could be due to changes in Neptune’s stratospheric chemistry, or random weather patterns, or even the solar cycle. More observations will be needed over the coming years to explore the reasons for these fluctuations. Future ground-based telescopes like ESO’s Extremely Large Telescope (ELT) could observe temperature changes like these in greater detail, while the NASA/ESA/CSA James Webb Space Telescope will provide unprecedented new maps of the chemistry and temperature in Neptune’s atmosphere.

“I think Neptune is itself very intriguing to many of us because we still know so little about it,” says Roman. “This all points towards a more complicated picture of Neptune’s atmosphere and how it changes with time.”

This research was presented in the paper “Sub-Seasonal Variation in Neptune’s Mid-Infrared Emission” published today in The Planetary Science Journal (doi:10.3847/PSJ/ac5aa4).

The European Southern Observatory (ESO) enables scientists worldwide to discover the secrets of the Universe for the benefit of all. We design, build and operate world-class observatories on the ground — which astronomers use to tackle exciting questions and spread the fascination of astronomy — and promote international collaboration in astronomy. Established as an intergovernmental organisation in 1962, today ESO is supported by 16 Member States (Austria, Belgium, the Czech Republic, Denmark, France, Finland, Germany, Ireland, Italy, the Netherlands, Poland, Portugal, Spain, Sweden, Switzerland and the United Kingdom), along with the host state of Chile and with Australia as a Strategic Partner. ESO’s headquarters and its visitor centre and planetarium, the ESO Supernova, are located close to Munich in Germany, while the Chilean Atacama Desert, a marvellous place with unique conditions to observe the sky, hosts our telescopes. ESO operates three observing sites: La Silla, Paranal and Chajnantor. At Paranal, ESO operates the Very Large Telescope and its Very Large Telescope Interferometer, as well as two survey telescopes, VISTA working in the infrared and the visible-light VLT Survey Telescope. Also at Paranal ESO will host and operate the Cherenkov Telescope Array South, the world’s largest and most sensitive gamma-ray observatory. Together with international partners, ESO operates APEX and ALMA on Chajnantor, two facilities that observe the skies in the millimetre and submillimetre range. At Cerro Armazones, near Paranal, we are building “the world’s biggest eye on the sky” — ESO’s Extremely Large Telescope. From our offices in Santiago, Chile we support our operations in the country and engage with Chilean partners and society. 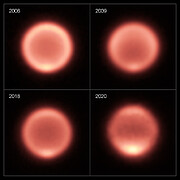 PR Image eso2206c
Neptune from the VLT and Hubble

PR Video eso2206a
Evolution of thermal images from Neptune
Send us your comments!
Subscribe to receive news from ESO in your language
Accelerated by CDN77
Terms & Conditions