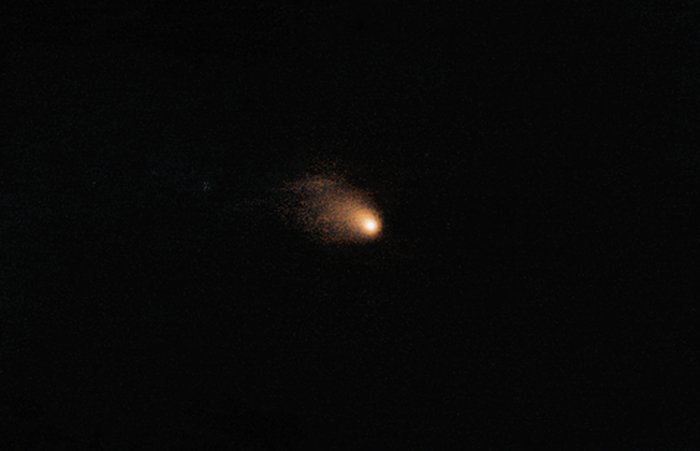 The bright, hazy smudge at the centre of this image is a comet known as 67P/Churyumov-Gerasimenko, or 67P/C-G for short. This is not just any comet; it is the target for ESA’s Rosetta spacecraft, which is currently deep within the comet’s coma and less than 100 kilometres from its nucleus [1]. With Rosetta so close to the comet, the only way to view the whole of 67P/C-G now is to observe it from the ground.

This image was taken on 11 August 2014 using one of the 8-metre telescopes of ESO’s Very Large Telescope (VLT) in Chile. It was composed by superimposing 40 individual exposures, each lasting 50 seconds, and removing background stars, to obtain the optimal view of the comet. Rosetta is contained within the central pixel of this image, and is too small to resolve.

The VLT is made up of four individual Unit Telescopes that can work together or individually to study the night sky. These observations used the FORS2 (FOcal Reducer and low dispersion Spectrograph 2) instrument on Unit Telescope 1, otherwise known as Antu, which is the indigenous Chilean Mapuche term for the Sun.

FORS2 can be used in various ways, but for the Rosetta campaign astronomers use it to image the comet and determine its brightness, size and shape; and also to analyse the coma’s composition.

Although 67P/C-G is faint in this image, it is clearly active, with a dusty coma extending some 19 000 kilometres out from the nucleus. This coma is asymmetric as the dust is being swept away from the Sun — which is located beyond the lower right corner of the image — and is beginning to form a characteristic cometary tail.

This VLT image is part of an ongoing collaboration between ESA and ESO to observe 67P/C-G from the ground while Rosetta is performing measurements at the comet. On average, the VLT obtains images of the comet every second night. These short exposures are used to monitor the comet's activity by studying how its brightness changes. The results are reported back to the Rosetta project and provide part of the information for planning how to orbit around it.

[1] Rosetta reached a distance of 100 kilometres from 67P/C-G’s nucleus on 6 August 2014, and has been moving closer to the comet since then.