Most large telescopes, including ESO’s Very Large Telescope (VLT) and the NASA/ESA Hubble Space Telescope, use just two curved mirrors to form an image. The ELT has three. Its secondary mirror (M2), the largest convex mirror ever produced, will hang above the spectacular 39-metre main mirror, M1. M2 will reflect the light collected by M1 to the tertiary mirror M3. The three curved mirrors will allow the ELT to deliver a better image quality over a larger field of view than would be possible otherwise. 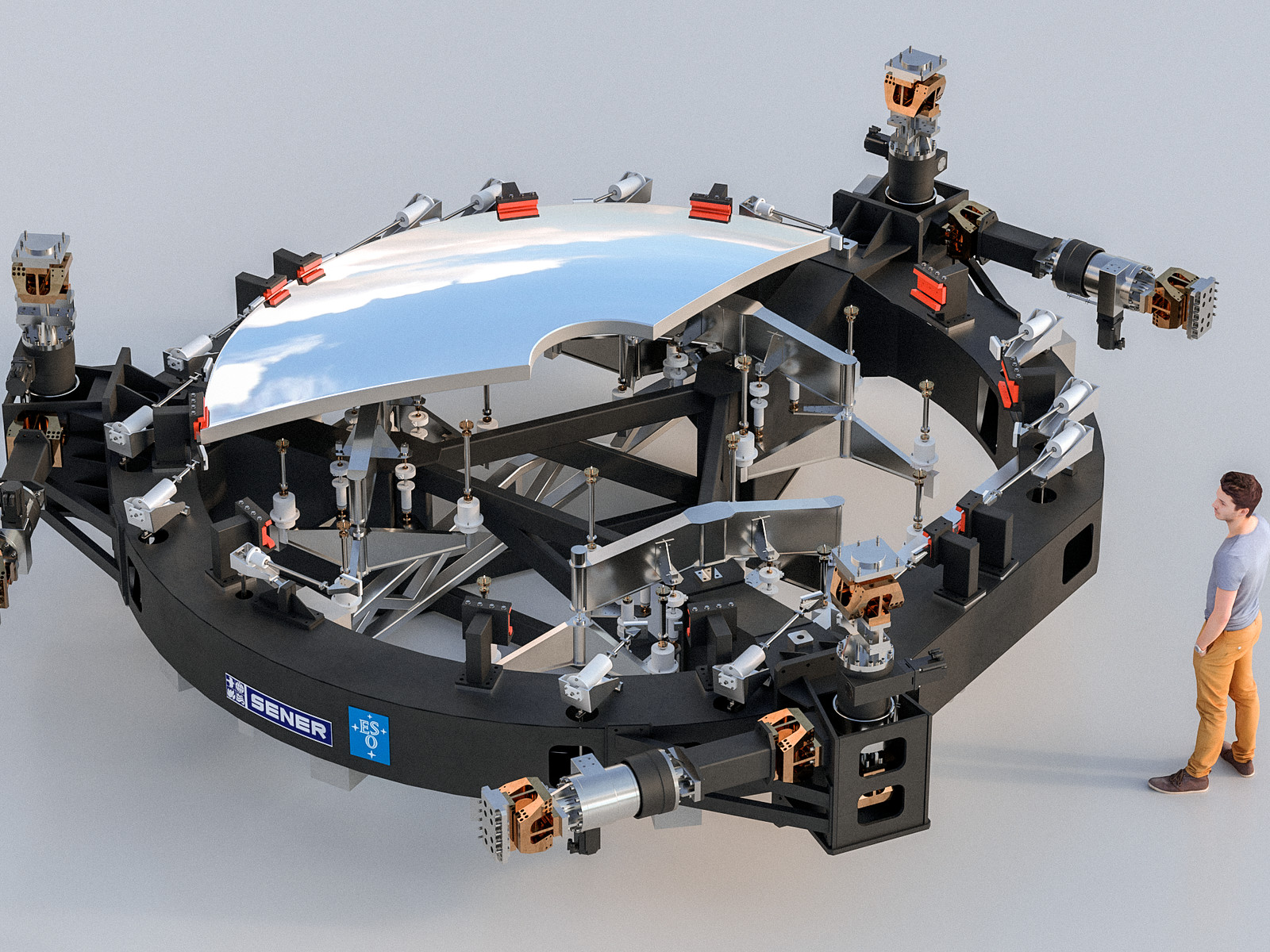 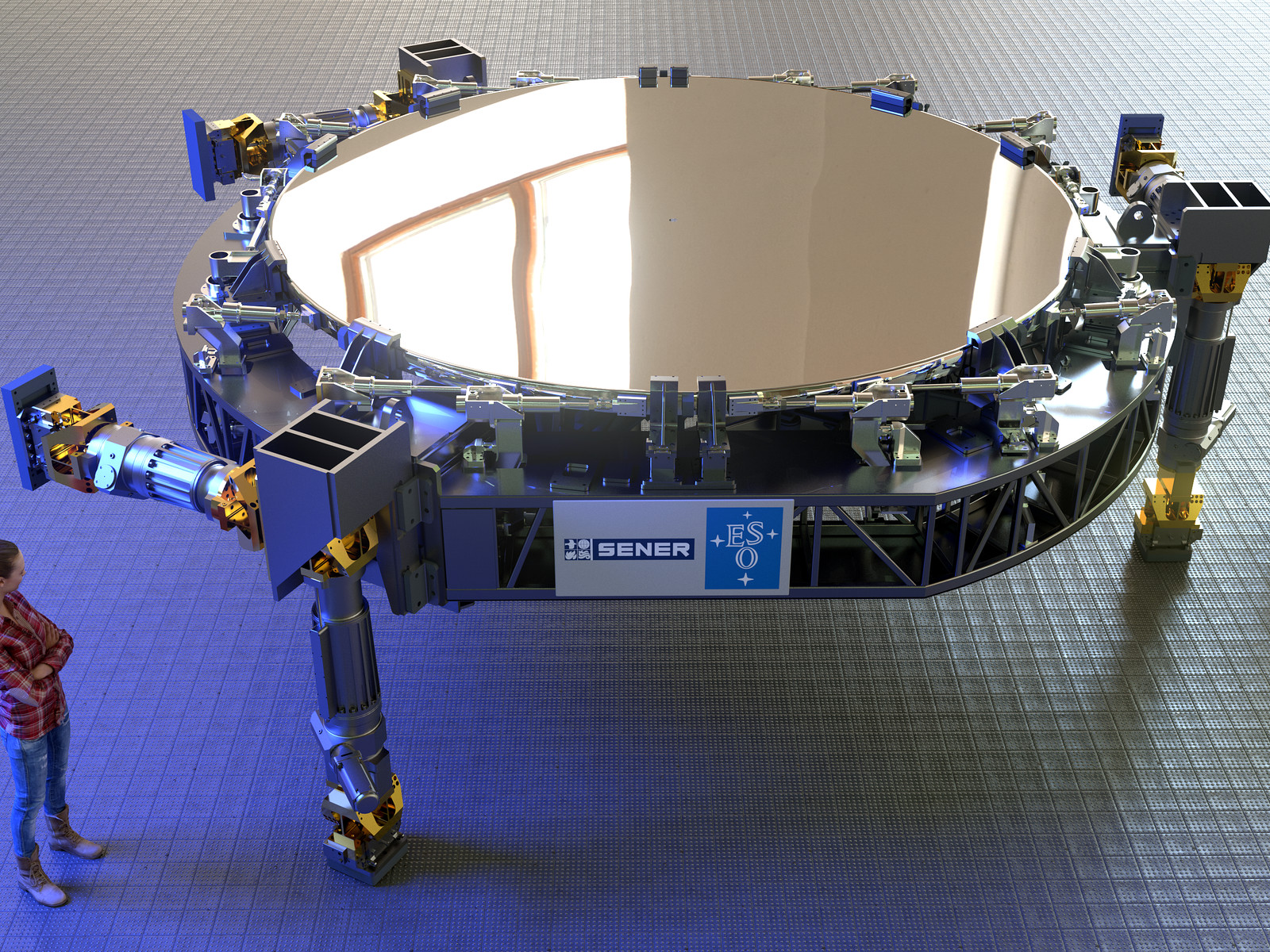 This image shows a rendering of the M2 mirror. Credit: ESO (L. Calçada)/SENER

This image shows a rendering of the M3 mirror. Credit: ESO (L. Calçada)/SENER

The ELT’s M2 mirror, with its 4.25-metre diameter, will, like many aspects of the ELT, set another record in the astronomical landscape. M2 will be the largest optical secondary mirror ever used on a telescope — it will be as big as the primary mirrors of many of today’s world-class telescopes. There is also the added challenge that M2 will hang upside-down over the ELT’s main mirror, about 60 m above the ground, held in mid-air by its support structure (called the M2 cell) and anchored to the telescope main structure. The M3 mirror is similarly large and complex, with its 4-metre diameter. The mirrors alone weigh more than 3 tonnes each; with the cell and structure included, the overall weight of each assembly is about 12 tonnes.

Both blanks of M2 and M3 are produced by the German company SCHOTT and are made of a special glass-ceramic material called ZERODUR®. Thanks to the unique properties of this material, the form and the shape of the mirrors will not change significantly with temperature during observations. This material is also extremely resistant; it can be polished to incredible precision and has been used in telescope mirrors for decades.

This image shows some of the people behind the scenes at the technical acceptance of the massive 3-ton blank for the ELT's secondary mirror. Credit: SCHOTT

The manufacturing of the M2 and M3 mirrors is a great example of the strong collaboration between ESO and European industries. The production of the blanks is being carried out by SCHOTT in Germany, the final polishing of the surface by the French company Safran Reosc, and the cells to hold the mirrors will be made by the Spanish company SENER. 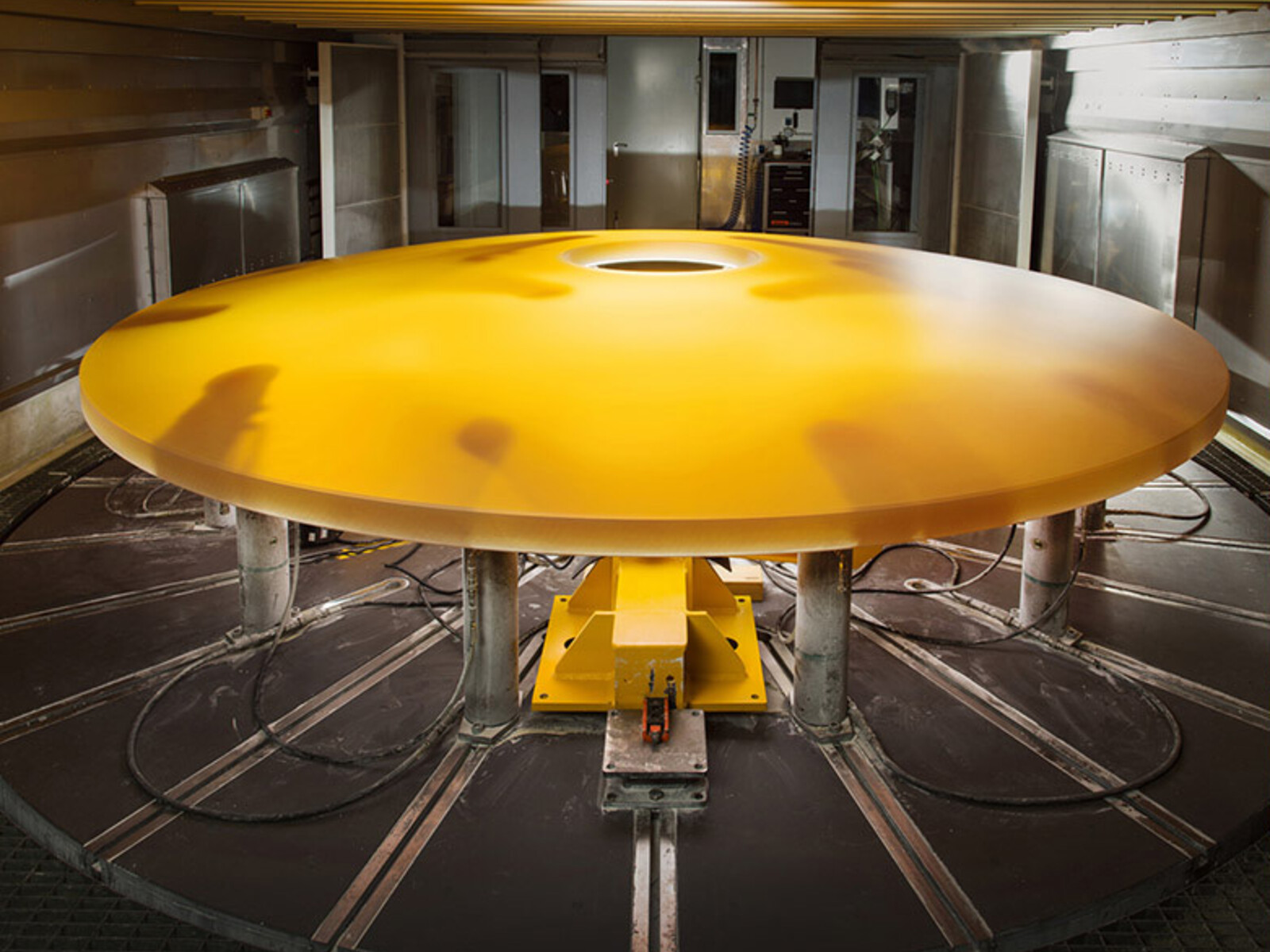 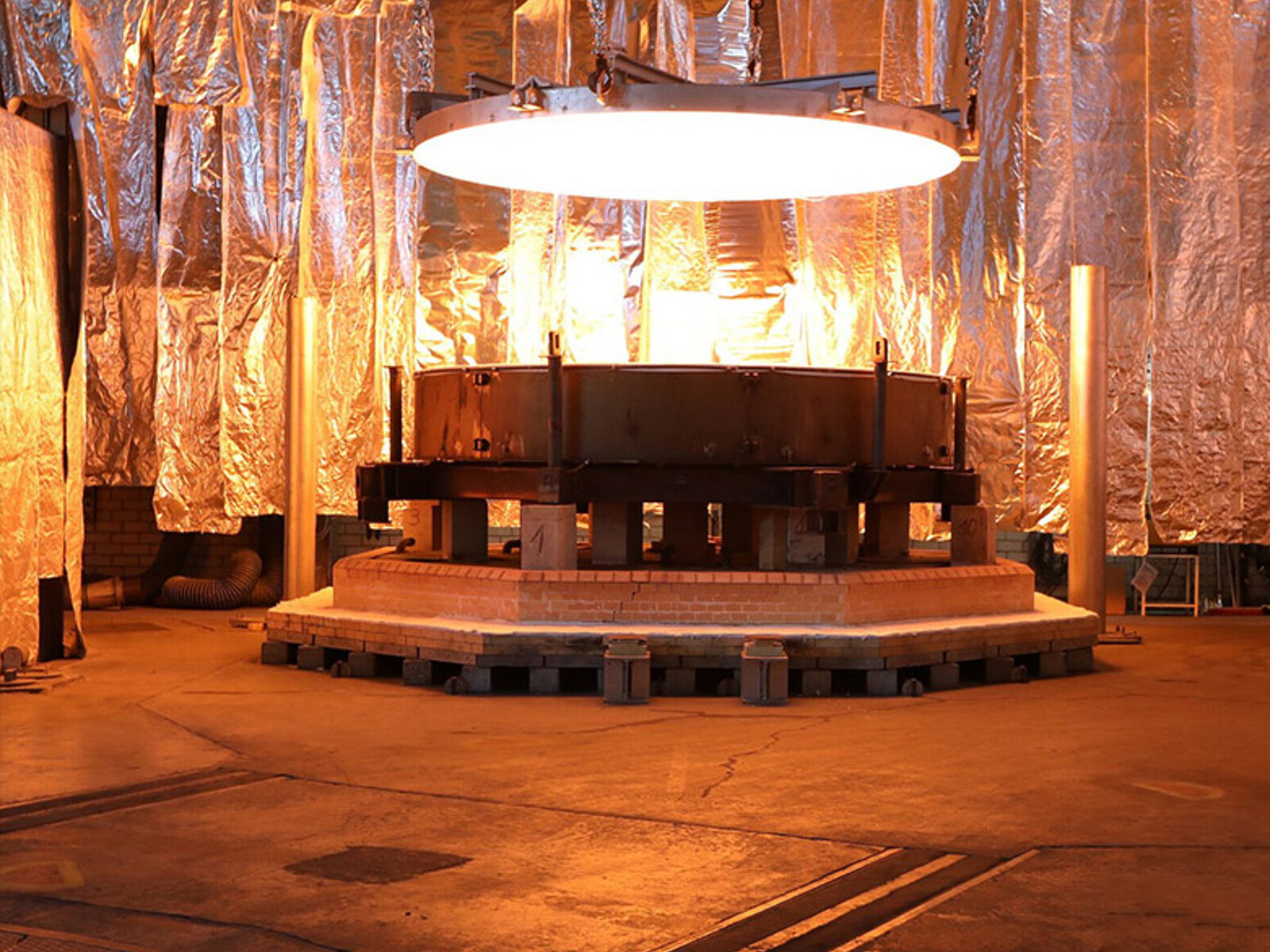 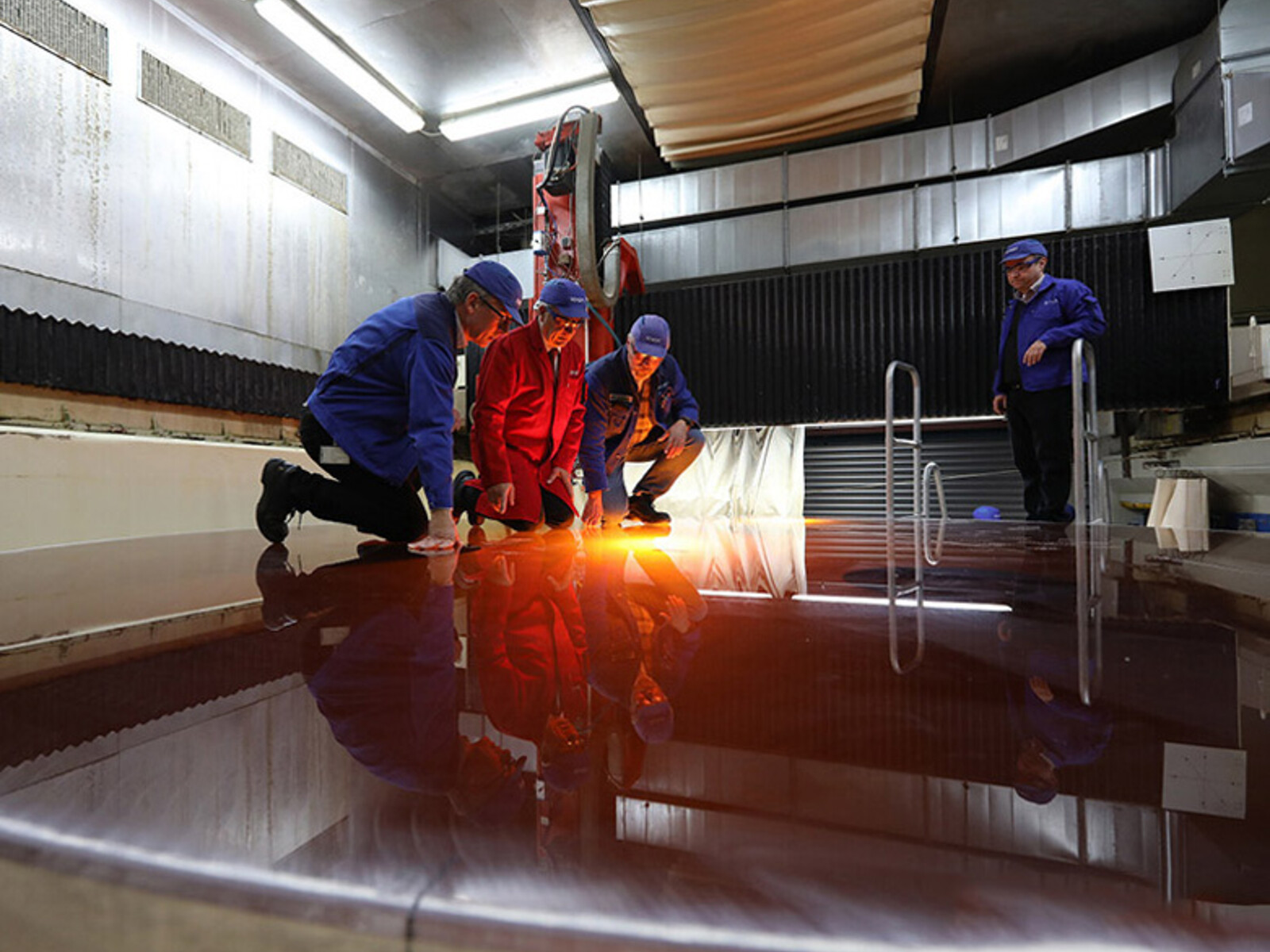 Technical details and challenges with M2 and M3

The M2 mirror is a convex 4.25-metre F/1.1 thin meniscus, about 100 mm thick, with an 800-mm central hole. Its optical surface shape is very aspheric, with a departure from a sphere that is close to 2 mm. The size, convexity, aperture ratio and asphericity make this mirror extremely difficult to polish and test.

Main characteristics of the M2 and M3 mirrors

The M3 mirror is a concave 4.0-metre F/2.6 thin meniscus, about 100 mm thick, with a 30-mm central hole. Its optical surface shape is mildly aspheric, with a departure from a sphere of only about 30 µm. Besides its 4-metre size, the M3 mirror is easier to manufacture and test compared to the M2, and the required M3 mirror production and metrology processes are more common. The M2 and M3 mirror blanks (i.e., the “glass” made by SCHOTT) require sophisticated production methods and processes. After an initial raw material casting in a cylindrical mould, each blank is carefully cooled down and annealed for about three months, so as to maximise the material’s homogeneity, and minimise the internal stresses and the number of bubbles and inclusions. The resulting glassy boule then undergoes a six-month heat treatment to transform the material into glass-ceramic and adjust the near-zero coefficient of thermal expansion to a few parts per billion accuracy. Each blank is then machined to its final geometry, and acid etched to remove residual subsurface damage and maximise the mirror strength. 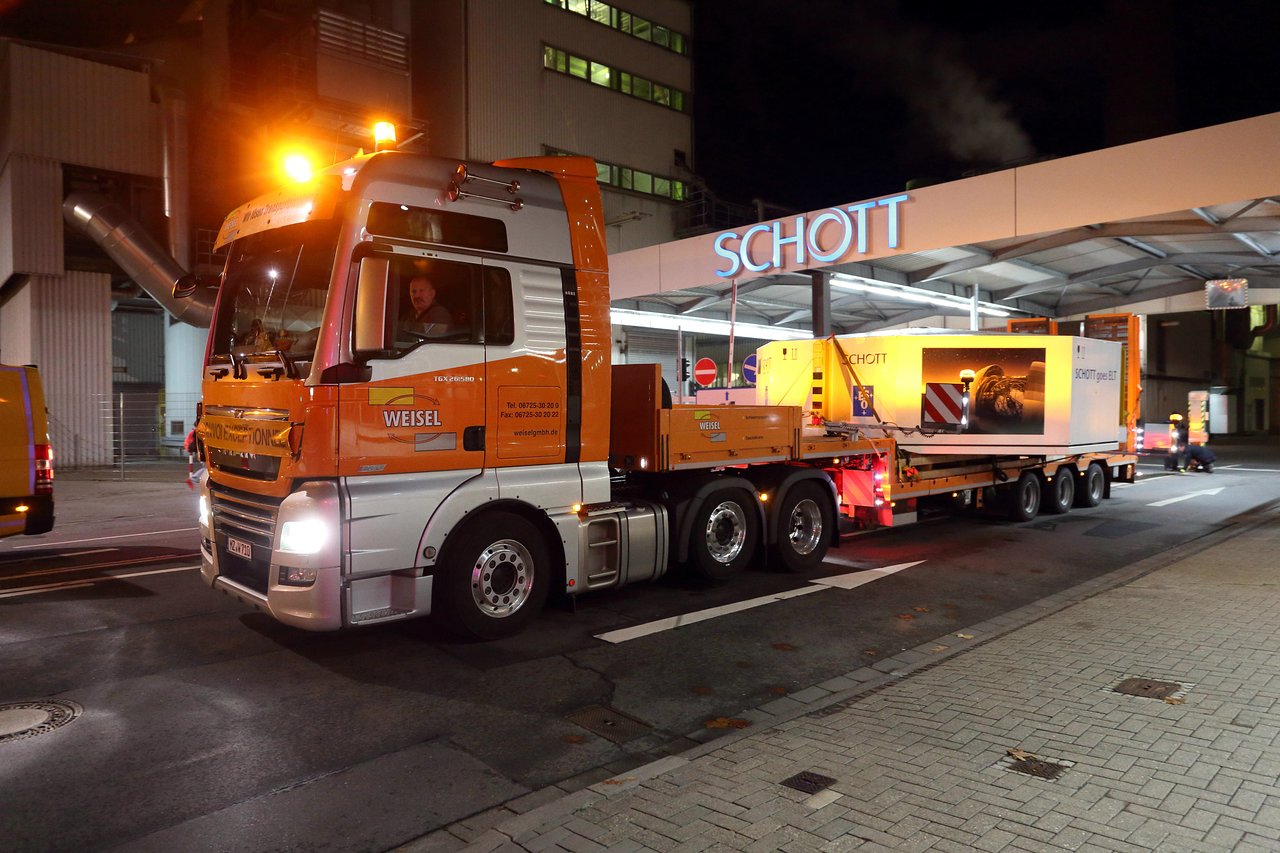 The blanks are then transported to Safran Reosc for figuring and polishing, in the same facilities where the 8-metre VLT primary mirrors were polished in the 1990s. These facilities have been refurbished to accommodate the specific requirements of figuring and testing M2 and M3. Each blank follows the same finishing process: adhesive bonding of the invar interface pads, and then a series of steps to achieve the final surface quality; grinding and fine grinding to an accuracy of a few µm, followed by polishing and figuring to an accuracy of a few nm — about 20 000 times thinner than a human hair. Both the grinding and polishing processes rely on a combination of small tool figure correction and mid-size tool smoothing on a dedicated 4-metre figuring machine. At the grinding stage the mirror figure is monitored using a 4-metre 3D coordinate measurement machine (3D CMM).

Interferometry testing through null correctors has been developed for polishing, using a giant Fizeau Test Matrix for M2 and computer-generated holograms (CGH) for M3. Both mirrors are supported on dedicated active metrology mounts during figuring to accurately match the force distribution in the mirror cells’ support. Each mirror requires about two years for figuring and polishing, not including the time needed to upgrade the facilities, the production of testing equipment and commissioning.

Both M2 and M3 mirrors are hosted on the telescope in dedicated cells, which provide shape adjustment capability to compensate static errors to some extent and position control for locating the mirrors within the telescope. The overall weight of each assembly (mirror and cell) is about 12 tonnes and the requirements to position such a massive structure are extremely challenging — despite the weight, the requisite accuracy of the positioning stage is on the order of just 0.1 mm. 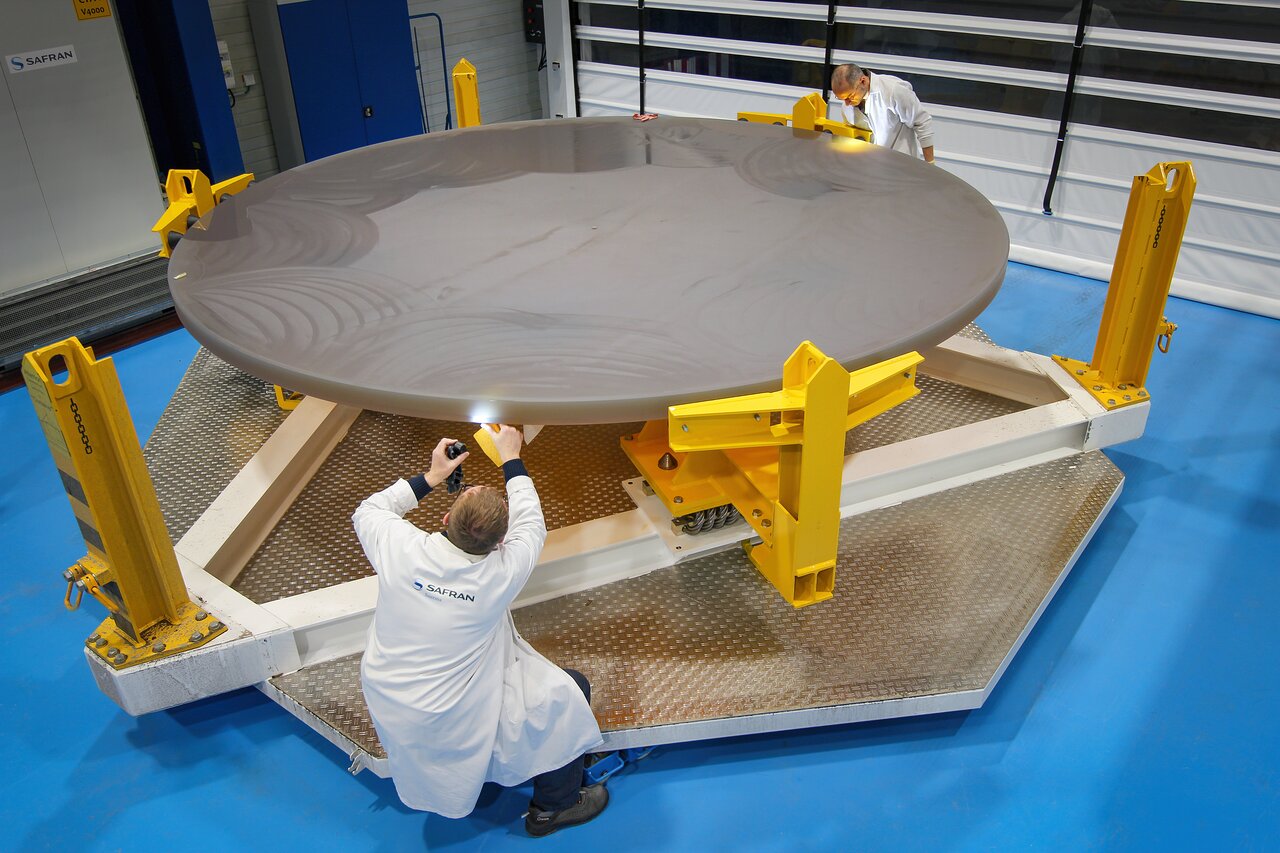 The cells for M2 and M3 have similar design concepts. Each mirror is axially supported on its back surface with an 18-point whiffletree, and laterally at 14 points on the mirror’s outer edge. As the M3 mirror is away from any pupil, the active correction of this mirror is mandatory. On the other hand, low-order deformations of the M2 mirror have very limited error propagation in the field, so the active shaping of M2 is implemented as a provision only.

Each mirror is connected via the axial and lateral supports to a common frame: the cell structure. Safety restrainers are connected to this structure to limit the mirror displacement and stress in case of earthquake and prevent the mirror from falling in case of catastrophic event, such as total failure of the mirror fixation interface.

In order to align the M2 mirror with respect to the rest of the optics, the whole assembly will be moved relative to the telescope structure using six position actuators (hexapods). Three actuators are oriented along the mirror optical axis, the three others are located within the plane of the centre of gravity. It is worth noting that the relative accuracy of this hexapod, which will move every few minutes, is in the sub-µm range, which presents a real challenge.