The largest adaptive mirror ever built

The largest adaptive mirror ever built

The fourth mirror in the ELT’s light path, M4, is one of the most challenging and exciting optical components of the telescope. When finished, this mirror will surpass any adaptive mirror ever made for a telescope and be the largest of its kind.

M4 is the main adaptive mirror of the ELT. The term ‘adaptive mirror’ means that its surface can be deformed to correct for atmospheric turbulence, as well as for the fast vibration of the telescope structure induced by its motion and the wind. In the case of M4, more than 5000 actuators are used to change the shape of the mirror up to 1000 times per second. In combination with the ELT’s fifth mirror, M5, M4 is vital in delivering the sharp images needed for science.

Measuring 2.4 metres in diameter, it will be made up of six thin segment mirrors, each only 1.95 millimetres thick and made of ceramic glass. Each shell is one of six 60-degree petal sections that form the circular segmented M4 mirror. The SCHOTT company in Germany has produced the glass-ceramic segments and delivered them to the French company Safran Reosc, who is in charge of polishing the thin ceramic shells. The AdOptica consortium in Italy is producing the shell assemblies and building the entire support unit.

With a diameter of 2.4 metres, the flat M4 will be the largest adaptive mirror ever built. Current adaptive mirrors are just over 1 metre in diameter, for example the M2 adaptive secondary mirror on the VLT UT4 telescope (Yepun) is 1.1 metres in diameter.

The M4 mirror uses the same principle as a loudspeaker; the mirror is made of a very thin shell levitating 90 microns away from its reference surface (this corresponds to the thickness of a standard A4 sheet of paper) and it acts like a membrane which deforms under the effect of about 5000 voice coil actuators. A voice coil actuator is a type of direct drive linear motor, and the name ‘voice coil’ comes from one of its first historical applications, vibrating the paper cone of a loudspeaker. It consists of a permanent magnetic field assembly and a coil assembly. The current flowing through the coil assembly interacts with the permanent magnetic field and generates a force that can be reversed by changing the polarity of the current.

Depending on the current injected into the coil the mirror can be pushed or pulled up to a distance of 50 microns from its mean position. With the help of a very fast and precise set of capacitive sensors and amplifiers that are co-located with the voice coil actuators, the mirror’s position is measured 70 000 times per second to an accuracy of a few tens of nanometres with the actuators being driven up to 1000 times per second.

M4 is made of several state-of-the-art components, the mirror and its reference structure being two of the most critical ones. The mirror is an assembly of six optically polished thin shells, or petals, made of the low-expansion glass-ceramic Zerodur© (manufactured by SCHOTT). The six petals are obtained from a 35 mm-thick blank, which is polished and thinned down to a thickness of less than 2 mm — necessary to achieve the desired flexibility for shaping the mirror — and then finally cut into a precise shape by Safran Reosc.

To adjust the shapes of the thin shells, a rigid and sufficiently accurate flat reference structure is also needed to hold the petals. This structure must be stiff enough to provide a good reference surface, whatever the orientation of the telescope. It also needs to hold all the actuators, which will deform and change the shape of the six petals.

The 2.7-metre diameter lightweight structure is made of Boostec® silicon carbide, one of the stiffest materials available (stiffer than steel, carbon fibre or beryllium). Its surface has more than 5000 holes which will hold the actuators, while the back surface is composed of several ribs to reinforce the structure. Owing to its large dimensions, the silicon carbide structure is made of six parts brazed together, similar to the Herschel primary mirror which was manufactured more than a decade ago. The manufacture of the structure is significantly challenging, not only because of the depth, length, and thickness of the ribs, but also given the requirements on its straightness, as well as the number and accuracy of the actuator holes. 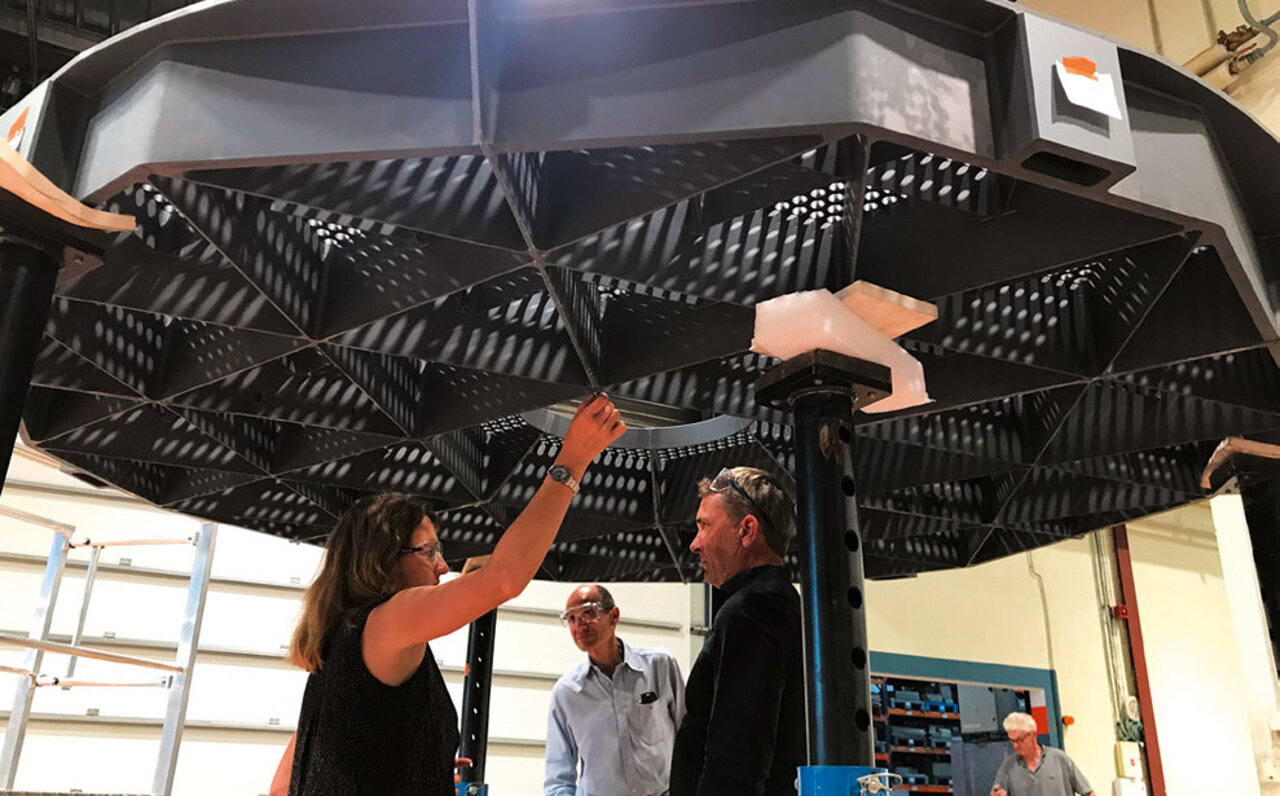 The back of the reference structure is supported by a 12-point whiffletree and laterally at six points on the mirror edge. The overall M4 sub-system is mounted on six position actuators (a hexapod system), which provide the fine alignment of the mirror. It is further mounted on a rotating mechanism (called a switcher) which is used to select the Nasmyth focus to which the light will be directed.

The M4 unit provides real-time compensation of wavefront errors, over broad spatial and temporal frequency ranges (up to 1kHz). This covers real-time shaping and fast steering of the M4 flat mirror, as required to compensate for wavefront errors including, but not necessarily limited to, those caused by atmospheric turbulence. It includes the accumulation of tip-tilt and low order terms on the mirror, and their offloading via the telescope control system when required (for example, to prevent saturation). Fast steering is also used for fine correction of telescope image motion residuals. In addition, the M4 unit provides mirror position control through tip, tilt, and in-plane lateral displacement, as well as a switching mechanism for Nasmyth focus selection.

Safran Reosc (France) started to manufacture the thin segment mirrors in 2017. Each glass-ceramic segment is only 1.95-mm thick and needs to have a thickness uniformity better than 15 microns. In addition, the wavefront error of a shell optical surface cannot exceed 14 nm root mean square after flattening. Safran Reosc has developed a manufacturing process that consists of polishing a 1.4 m diameter and 35 mm thick circular blank, then thin it on the back side, and then cut to the final pie-shape. In total, 12 shells will be manufactured. This means a complete shell set can be replaced when M4 mirror recoating is required.

Many of these thin shells are now ready for integration at AdOptica in Italy. Given the number of components that need to be assembled to a high degree of precision, the integration will be a lengthy task requiring procedures to ensure that the assembly and calibration meet their requirements. It should take 1.5 years to fully integrate the M4 mirror and start the final calibration of each mirror segment and their associated capacitive sensors. A test tower is being specially developed to verify and test the M4. It will be used in Europe to calibrate the M4 unit before being transferred to Chile where it will be used before the mirror is installed on the telescope and kept on-site for any future major maintenance activities that may be required.