We share the Universe with hundreds of billions of other galaxies, the very first of which formed when the Universe was still very young.

Quick Links:
Galaxy evolution | The intergalactic medium
In a nutshell

We share the Universe with hundreds of billions of other galaxies, the very first of which formed when the Universe was still very young.

Very distant galaxies are so far away their light takes billions of years to reach us. With modern telescopes, astronomers can travel back in time to reveal these extremely distant, and therefore very young, galaxies as they were in the early Universe. There are limits to how far back we can look with current telescopes. After the Big Bang, the Universe grew cool and dark. Only once dark matter and gas had clumped together did stars and galaxies begin to shine. Energetic radiation from those galaxies then ionised the remaining neutral gas, but exactly when and how this all occurred remains one of the biggest mysteries in cosmology. As an enormous telescope equipped with the most advanced instruments, the ELT will be able to observe these first galaxies and revolutionise our perception of the Universe.

When astronomers use current telescopes to study light from far-away galaxies, they observe the combined light emitted by all the individual stars. However, to make significant progress in our understanding of the evolution of the Universe, we need to look at these stars individually. For galaxies in our Local Group and beyond the ELT will be able to resolve individual stars, allowing us to perform a sort of galactic archaeology, using the stellar fossil records to decipher how galaxies formed and evolved.

The ELT will also contribute to a better understanding of the complex interplay between galaxies and the surrounding intergalactic medium (IGM). The IGM provides the reservoir of gas for the ongoing infall of fresh material into galaxies. At the same time, it acts as a repository for the gas driven out of galaxies by energetic processes such as active galactic nuclei and supernova explosions.

The ELT will observe distant galaxies to gather clues on how these buildings blocks of our Universe formed and evolved. It will also search the early Universe to discover the very first galaxies.

It’s not just empty space in between galaxies: the gas in the intergalactic medium contains most of the visible matter in the Universe and is key to the process of galaxy formation and evolution. The ELT will help us study its properties.

How did galaxies form and evolve?

Galaxy formation and evolution is driven by a number of mechanisms and a complex interplay between them. These include the hierarchical merging of dark matter halos (galaxies with smaller dark matter halos are believed to have formed first and merged to form galaxies within larger halos), the accretion and cooling of gas, and the gravitational fragmentation and the formation of molecular clouds. Star formation, nucleosynthesis, metal-enriched outflows that are driven by stellar winds, supernova explosions and energetic output from accretion onto supermassive black holes also influence galaxy formation and evolution.

Thanks to recent deep surveys, it has become easier to observe properties of galaxies such as their luminosity, size, star formation rate, mass — and the mass of the stars within them, as well as how they evolve with redshift. But we now need more detailed spatially and spectrally resolved studies of individual galaxies to improve our understanding of their underlying physical processes. A comprehensive picture of galaxy formation should also describe a galaxy’s internal structure, for example, how stellar populations and dust are distributed or what properties its central region has. Current facilities, however, are not able to describe these internal properties in detail in far-away galaxies as they cannot reach the required small spatial scales. We need to get closer to the scale on which star formation occurs, which is that of giant molecular clouds; the ELT will enable us to do just this.

The Hubble Space Telescope has extended our view of evolving galaxies from the optical to the near-infrared, probing the emission from many stars in galaxies at high redshift and resolving the shapes and colours of galaxies. At the same time, integral field spectrometers, such as those on ESO’s Very Large Telescope, have routinely mapped the motion of ionised gas and the physical conditions of galaxies. The ELT will allow astronomers to observe fainter and more distant galaxies, up to when they were first building up their stellar populations and gas reservoirs, so studying them in more detail would much improve our current picture of galaxy evolution.

Characterising galaxies with a wide range of masses, star formation activities, and surroundings requires a giant leap in spatial resolution. This is uniquely provided by the ELT, with its 39-metre main mirror. and diffraction limit of 13 mas (~100pc at z > 1) in the K band  (λ ~ 2μm). Both imaging and integral field spectroscopy (with the MICADO and HARMONI instruments) will enable deep views of galaxies across cosmic times that are ~15 times sharper than is currently possible with Hubble, and ~6 times sharper than possible with the James Webb Space Telescope. HARMONI will overcome present limitations by tracing structures just a few tens of parsecs wide, and providing detailed studies by exploiting spectroscopic information with high angular and spectral resolution and sensitivity.

Some 380,000 years after the Big Bang, the temperature of the Universe was low enough that the hydrogen-dominated IGM, which pervades space, became neutral. The IGM today, however, is fully ionised, heated by the ultraviolet emission from galaxies and active galactic nuclei. However, how and when the IGM turned from neutral to fully ionised remains a matter of great debate.

The prime sources of reionisation have remained elusive so far and the quest for such sources, which produced the ultraviolet radiation that reionised the IGM, is closely related to the search for the first, most distant galaxies. Ultra-deep observations of faint sources with the ELT’s HARMONI and MOSAIC instruments will allow astronomers to determine the ionisation state of the IGM at redshifts from 5 to 13. In other words, the ELT will push back the limits of the observable Universe to the end of the Dark Ages, when the first light-emitting objects, which ionised much of the content of the Universe, switched on.

Scientists will be able to use MOSAIC to study Lyman α galaxies at high redshift. Credit: MOSAIC Consortium

The gas in the intergalactic medium is revealed by the numerous hydrogen absorption lines that are seen in the spectra of quasars. Astronomers have seen that at high redshift the IGM contains most of the baryons in the Universe and is therefore the baryonic reservoir for galaxy formation. In turn, galaxies emit ionising photons and expel metals and energy through powerful winds that determine the physical state of the gas in the IGM.

This interplay of galaxies and gas in the IGM is central to galaxy formation, but it is complex, and happens on scales of the order of just one megaparsec. The ELT’s MOSAIC spectrograph will be able to explore the distant Universe (at z ~ 2.5) in three dimensions to study the IGM structure and its chemical properties, and to look for correlations between the position of galaxies and gas density peaks in the IGM. 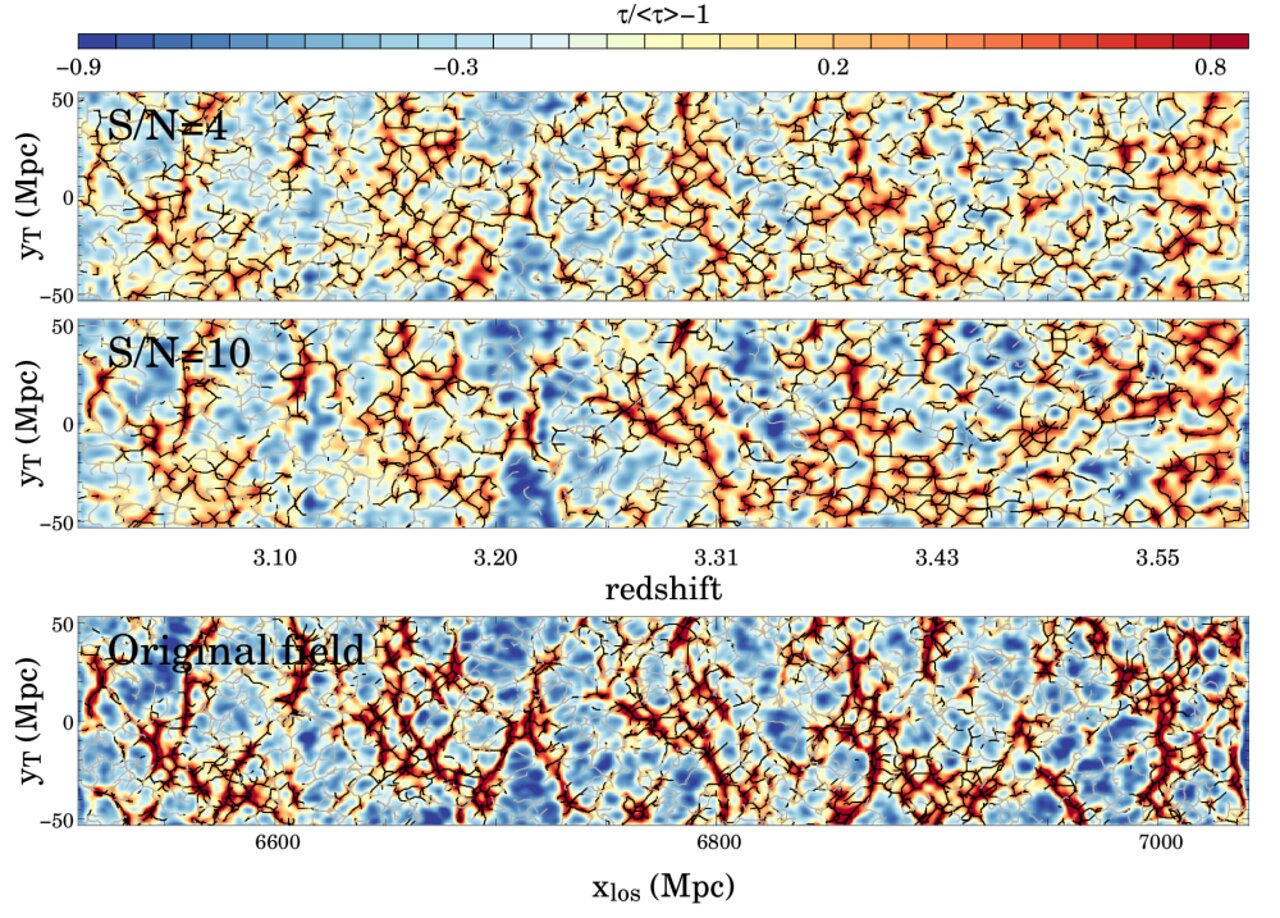 A spectroscopic survey with MOSAIC will enable the mapping of the IGM in the distant, young Universe. Credit: C. Laigle, J. Japelj

The absorption lines in the spectra of quasars arise from moderate density fluctuations in a warm, photo-ionised IGM. The spatial distribution of the IGM is related to the distribution of dark matter. The full density field can be reconstructed using a grid of lines-of-sight, but this requires at least about 900 randomly distributed targets per square degree. At a redshift of 2.5 there are ~900 Lyman Break Galaxies per square degree and around 50 (brighter) quasars. With MOSAIC, the ELT will be able to use these beacons to map the structure of the IGM at redshifts between 2.2 and 2.4 with moderate spectral resolution.

The ELT’s HIRES instrument will also study directly the IGM. One exciting prospect is detecting elements synthesised by the first stars in the Universe — the massive, metal-free Population III stars. The ability of HIRES to obtain high-signal-to-noise, high resolution spectroscopy for bright (AB mag ≤ 21) quasars will allow astronomers to study absorption lines too weak for current telescopes, resulting in an order-of-magnitude increase in the sample of useful background sources at high redshifts.