In our understanding of the Universe and its physical laws, there are some basic quantities that are assumed to be constant, the so-called fundamental physical constants.

In our understanding of the Universe and its physical laws, there are some basic quantities that are assumed to be constant, the so-called fundamental physical constants.

For millennia we believed that Earth and the heavens were subject to different laws, a view still implicit in our distinction between physics (describing the world around us) and astronomy (describing the rest of the Universe). The Newtonian revolution showed that a broad range of phenomena in both terrestrial and celestial realms can be described by a single and unchanging set of laws. Modern astrophysics has turned this into a question that can be answered experimentally.

Our current definition of a fundamental constant of nature is any quantity whose value cannot be calculated using a given physical theory but can only be determined experimentally. Examples include the fine-structure constant (a measure of the behaviour of the electromagnetic interaction) and the proton-to-electron mass ratio (a measure of the interplay between the strong and electroweak forces). If we assume that the laws of nature have always been the same everywhere in the Universe, then these fundamental constants must really be constants. But if this assumption does not hold, then they may vary with the epoch and location of any specific measurement.

The ELT will build upon and improve ongoing searches for possible variations in the fundamental physical constants across space and time. An unambiguous detection of such variations would show that the laws of nature cannot be universal. These variations could also have a profound impact on the physical properties of the Universe and its ability to host life; for example, if the value of the fine-structure constant was just 4% larger in the early Universe, the existence of carbon-based life would be impossible.

Are the laws of nature universal?

Astronomical observations can probe much longer timescales than Earth-based laboratory experiments and are therefore much more sensitive to possible variations in the fundamental constants. By exploring the spectra of extremely bright distant quasars, for example, the variability can be probed over a large fraction of the history of the Universe. However, making these observations is very challenging. It involves measuring the relative wavelength shifts of pairs of absorption lines whose wavelengths have different sensitivity to the fundamental constants. These sensitivities are often subtle, meaning that the wavelength calibration must be extremely accurate.

The HIRES ultra-stable high-resolution spectrograph proposed for the ELT will essentially remove the wavelength calibration uncertainties that plague current measurements and will vastly improve the constraints on the stability of fundamental constants. Astronomers will therefore be able to use the ELT to confirm or disprove claims that fundamental constants might vary and that we could simply be living in a fine-tuned location of spacetime where the constants are conveniently suitable for life. 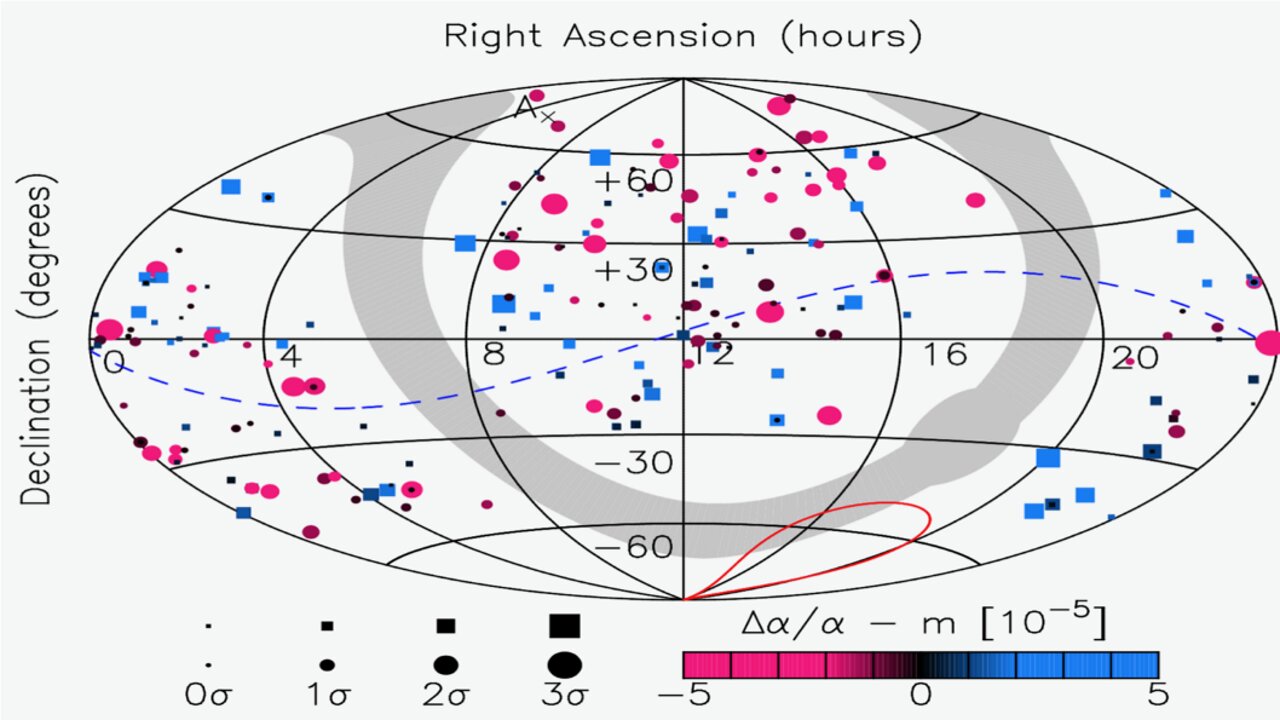 Full-sky map of all measurements of the fine-structure constant along the line of sight of bright quasars, in early 2019. Credit: Mike Wilczynska and John K. Webb

As well as looking at quasars through low-density absorption clouds that leave absorption lines in the quasar’s spectra, the ELT will also test the fundamental constants in very different astrophysical environments, such as at the surface of white dwarfs. The latter will provide stringent tests in environments where gravity is extremely strong, complementing those done at the centre of the Milky Way.

The most natural theoretical explanation for the variability of fundamental constants is due to a scalar field that is coupled to the electromagnetic field. The Higgs boson discovered at CERN in 2012 is the first known example of a scalar field in nature, but it is not believed to play any direct role in cosmology. Nevertheless, further scalar fields are ubiquitous in fundamental physics scenarios. For example, the variability of fundamental constants is unavoidable in string theory, due to the changing size of hidden spacetime dimensions. Unfortunately, string theory cannot accurately predict the amount of this variation, which makes the ELT tests all the more compelling.

Any improved test of the stability of these fundamental constants (whether it's a detection of a variation or a null result) will shed additional light on the allowed unified theories of the fundamental interactions, on the existence of extra dimensions of spacetime, and on the possible roles of large-scale scalar fields acting in the late Universe. One of these roles is the source of the dark energy, which is currently causing the expansion of the Universe to accelerate.

A discovery that the fundamental constants do vary across spacetime would have huge implications. It would mean, for example, that Einstein’s equivalence principle – which states that it is impossible to tell the difference between the effects of gravity and the effects of acceleration, because gravity is a fictitious force, due to the local geometry of spacetime – does not hold. The ELT will finally reveal the nature of these constants, marking an enormous step forward in the realm of cosmology.